Where To Find Acceptance

I just finished reading My Lesbian Experience With Loneliness for the second time.

When I first encountered Nagata Kabi’s journal-turned-book back in May of 2017, it resonated with me immediately. I consider it the most emotionally moving book I read that year.

In my fervor to recommend the books to friends, I often found myself having to explain how it wasn’t just pornography (despite the provocative cover art). My favorite example was the author’s brief page or two on self-harm. As someone who has (luckily) never been in that mind space, it really helped me to empathize with those who have. I had heard analogies before, and the idea of being in control of the pain, but her specific observation about externalizing the pain to create a visible / causal relationship was eye-opening. 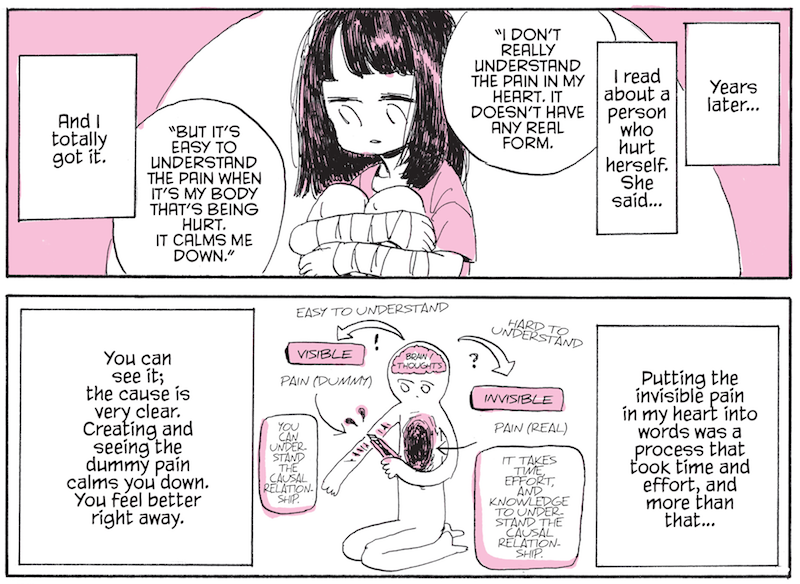 Note: Read the images right to left, top to bottom

In my initial read-through last year, I engaged with the work emotionally and nakedly. I felt the author’s pain, cheered at her success, and laughed (hopefully with her) at the self-deprecating humor.

I’ll say it again, it moved me. But self-harm metaphor aside, not much stuck with me afterwards. Coming back to it now, I remembered the general shape of her life, but not the details, the lessons, the humor.

Reading it a second time, I was in awe of what the book had to say about self-acceptance. The text presents a clear blueprint for how to seek personal fulfillment, and the associated pitfalls.

Disclaimer: I realize it can be unwise (potentially unhealthy) to try and map any sort of narrative onto REAL LIFE™️. I merely seek to examine the text, as if it were a piece of fiction, with the goal of learning from the trials (and more trials) and eventual tribulations of this character in this book, henceforth referred to as Nagata. 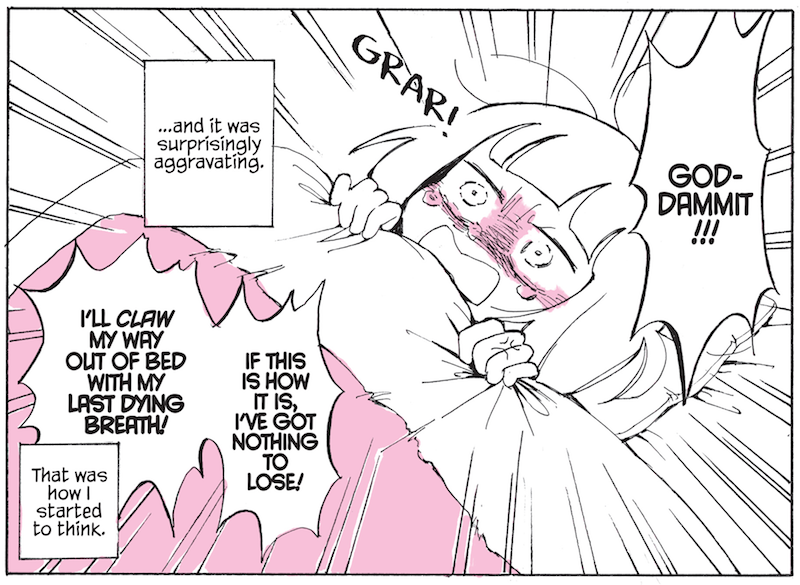 My favorite aspect of the narrative is how much failure there is. Failure allows one to learn from their (or other’s) mistakes. Especially when it comes to head space, I tend to prefer learning “what not do”, as it’s often more actionable than “hey this worked for me, you try it!”

If this sounds appealing, I highly recommend The Happines Hypothesis and CGP Grey’s short video on how to Maximize Misery.

Nagata initially connects her depression with leaving school and, as a result, losing the place she belongs. Rather than confront the assumption of “I need to being defined by external actors”, she instead seeks to fill this void with coworkers. 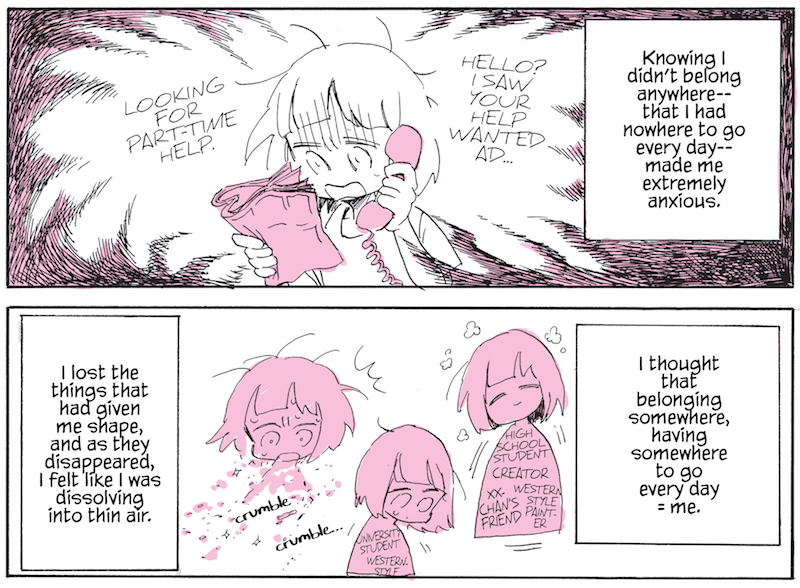 However, she soon realizes that “school === work” was a false equivalence. 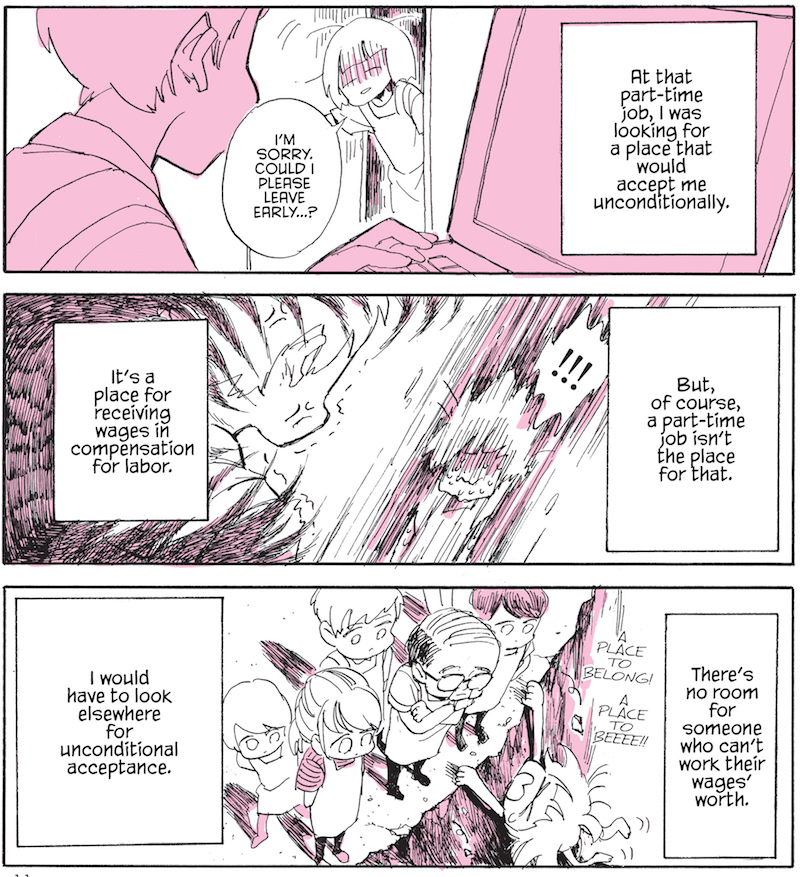 She has a similarly hollow experience at a bakery, then lives with her parents, unemployed, for quite some time. Taking the advice from bakers who turned her down, Nagata eventually channels this free time and energy into her manga and makes her debut, seemingly fixing everything. 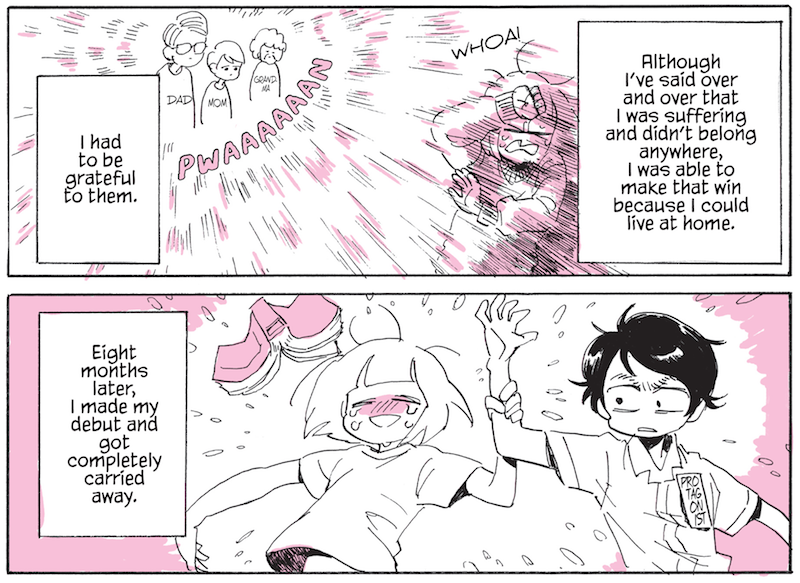 However, the salvation is fleeting. The success carries with it new and exciting sources of stress and doubt. 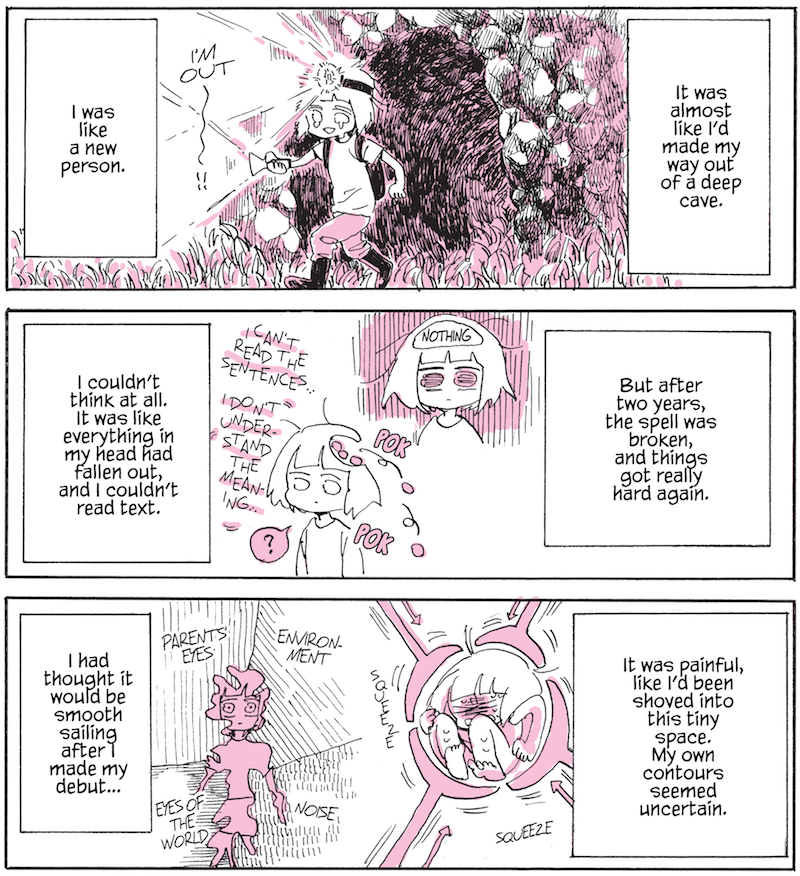 It eventually gets to the point that she seeks medical treatment, which is immediately helpful. Around this time, she starts re-examining her relationship with her parents.

Nagata comes to realize that a large source of her low self-esteem comes from the people she lives with: her family.

On a surface level, yes, they were often less than supportive.

But the important takeaway Nagata learns from this isn’t on the extremes of “Mother knows best!” or “I’m cutting you out of my life”. Nagata realizes the true problem is how much she let herself rely on her parents approval, on their recognition. She describes and draws it almost like a split personality. 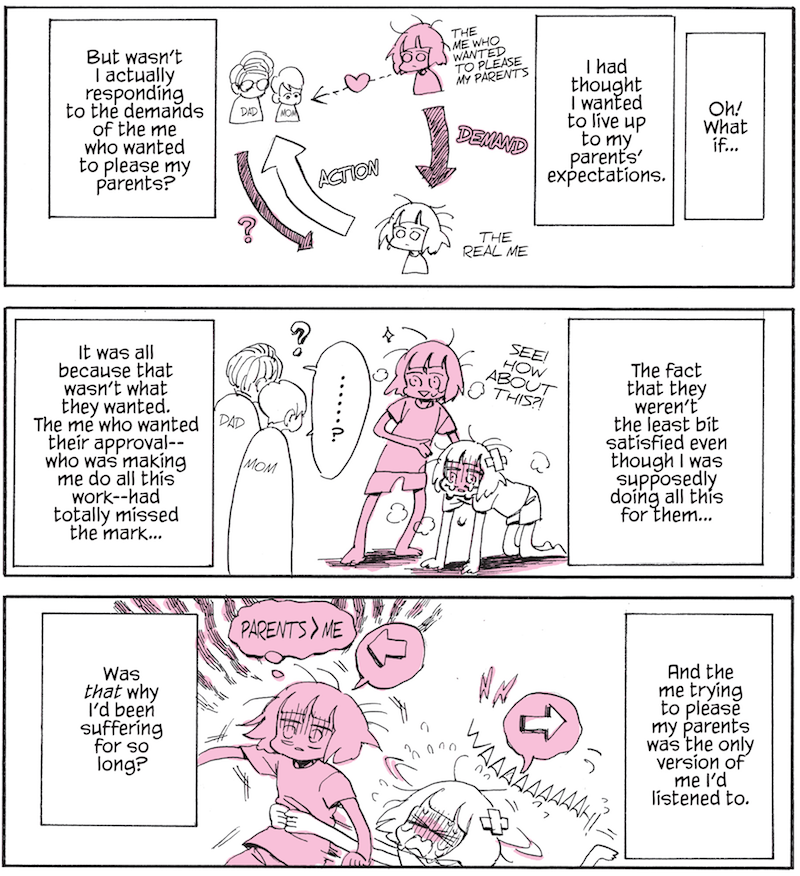 And this is the recurring pattern. She spends these formative years trying to get validation and recognition from her peers, her audience, her parents. But this will never work! If she is constantly straining herself to appeal to her coworkers, to her audience, to her parents, the work never ends. How could she ever be at peace?

Seeking to confront one of her remaining areas of discomfort — physical intimacy — she attempts to lose her virginity to an escort. The immediate impact is unsatisfying and alienating. 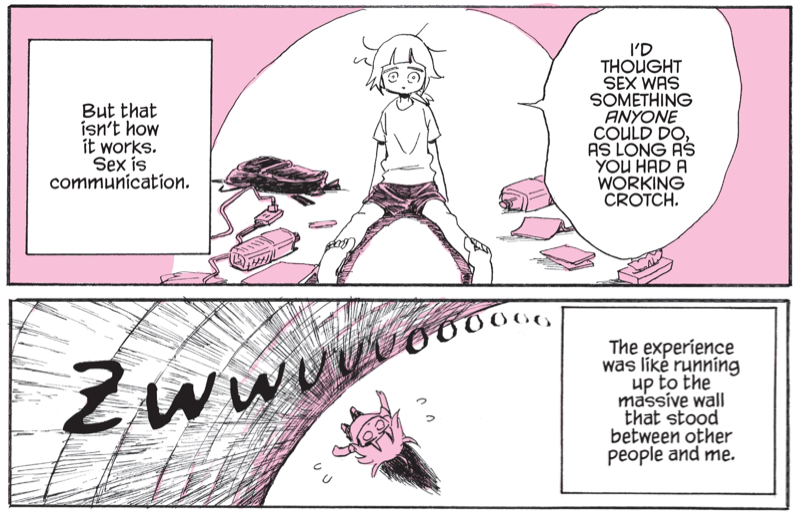 But the end result is euphoria. Not only for trying new things and putting herself out there, but because the act of seeking a female escort in the first place carries with it an implicit self-acceptance of her sexuality.

It normalizes her. She no longer feels like an outsider. And yet there wasn’t any witness, any external arbiter per se. The triumph lies not only in accomplishment, but in self-awareness. 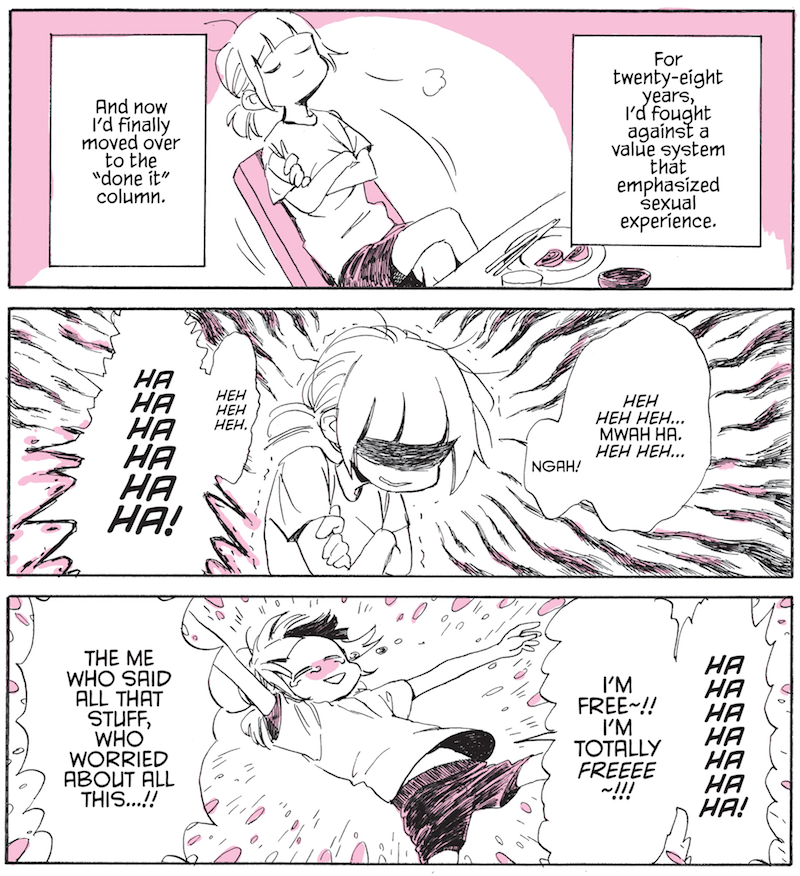 This catalyst in turn inspires the production of this book, and the arc is complete. Through her autobiographical manga, Nagata finally achieves actualization through self-acceptance.

Yes, this is inextricably tied to the manga’s success and the subsequent audience filling her need for connection, but she achieved similar external validation during her debut to no avail.

This time it’s different, in part because the autobiographical is was so tied to her identity. Her TRUE identity. 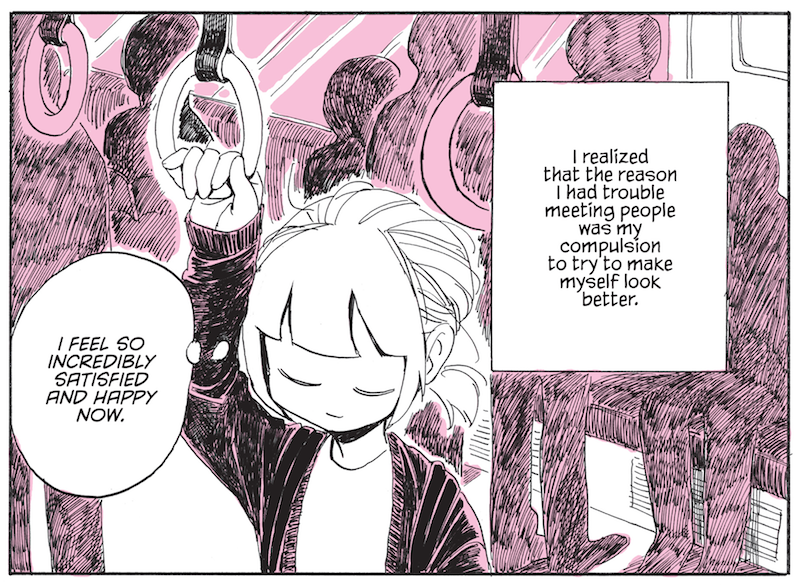 Now, the overall lesson here isn’t as simple or naive as “be yourself”. On the way she made significant changes and self-investments.

Yes, for all of her angst leading up to it and despite the crippling ennui immediately afterwards, her initial visit to a prostitute was instrumental in demystifying sex and growing more comfortable with her body and her self-image.

But let’s not forget the several pages on personal hygiene and the realization that (a) it takes work and (b) it’s worth it. 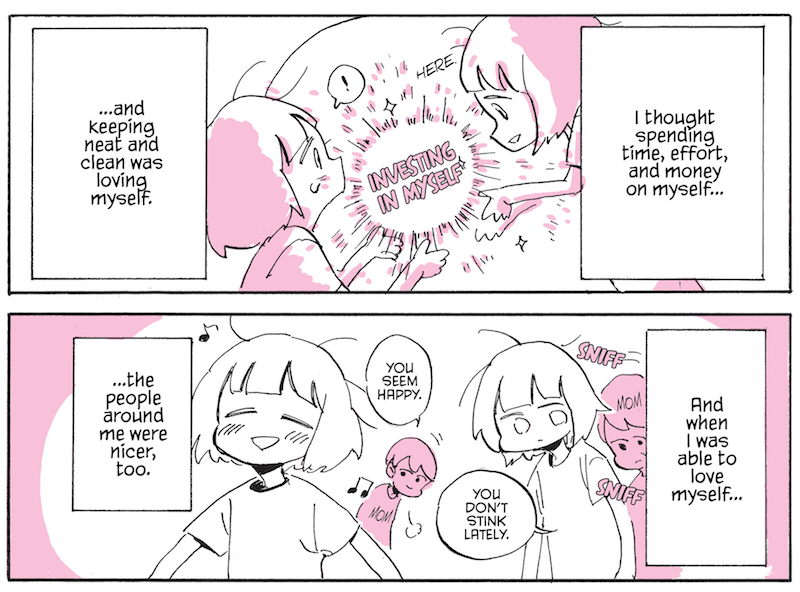 My Lesbian Experience with Loneliness is a heart-warming and often funny story about self-discovery and success. But it stands out to me so much than other works of it’s genre (autobiographical here’s-how-I-did-it) because of the very personal mistakes and internal lessons learned along the way.